Down Life's Highway...Mom, Young Switch Road and the little shack that built me 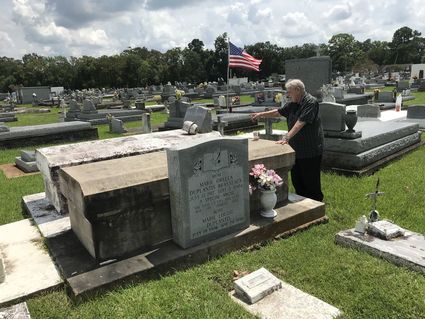 The Record columnist Roy Dunn visits the grave of his mother in Abbeville. La. where he was born and raised.

In my mind, from time to time, I go back to times of my youth. Raised on Young Switch Road, named after the railroad switch station, less than 150 yards from Mom and my grain storage shack we called home. It was salvaged from a farm and drug to our spot by a team of mules, pulling our shed on a sled. That little one-room building was our castle. It had room for one bed. I slept on a cornshuck pallet. Two boards nailed side by side was our table. Nail kegs, with feed sack covers, were our chairs. We had no utilities or indoor plumbing. A coal oil lamp and stove gave us light and a way to heat.

Mom was a wash lady who did laundry and ironing for the well to do in town. She washed on a scrub board, with homemade lye soap, mornings and hung the clothes to dry on the line. At night she ironed with a sad-iron way into the late hours. During cotton-picking time, she and I were in the field before the dew dried and picked all day. We then came home to chores. Five days a week. I woke at 4 a.m. and walked a half-mile to the Boudoins' place and milked two cows and fed the calves. I was paid with two gallons of milk a week, and a lifesaver it was. From it we got our butter, milk and clabber. I did other farm work also and during the sugarcane season, I cut cane. Being athletic, I was pretty good at it. I shucked corn and grained it all day and was paid with a bag of corn that I took to the mill for meal. They milled the corn, kept a portion, then netted out a small amount to me, which provided cush-cush, cornbread and a base for frying fish and so forth. The job I hated worse was pulling indigo in the rice field, standing in water, hip high all day. I got a job in town at a restaurant where I washed dishes and peeled potatoes. I made 50 cents a night and all the potato peelings I wanted. Mom would boil them and make soup.

Young Switch Road either had ankle-deep dust or mud on it. With a good wind, dust covered everything in sight. However, it wasn't only the wind, Young Switch was where sugar cane was loaded onto boxcars for the syrup or sugar mill. Horse drawn wagons or tractors could make dust clouds. I learned to drive horses, mules and tractor pulling wagons at that old station. The loads moved up slowly to the weight scales. I moved them up while the men visited in the shack. The job didn't pay anything but it was exciting and made an eight-year-old boy feel grown up and important. The biggest thrill was when a farmer taught me how to drive a tractor. There were few in those days, in fact, I just recall a couple. Horses and mules pulled most loads. The switch station had other uses. Livestock would arrive by train and be driven down Young Switch Road to the sale barn and slaughterhouse.

Early mornings Mom would wash a load of clothes for the town folks, hanging them on the line to dry while we spent all day in the cotton field. When we would get in evenings, she starched and ironed them for people to pick up. The next day we would repeat the process. One day, while we were away, a load of mustangs arrived at the switch station. The horses being herded to the sale barn kicked up clouds of dust as they thundered down that narrow dirt road. Very seldom had I seen Mom in tears during those hard depression days but this day she cried openly. All the clothes on the line had to be taken down, rewashed and hung again the next morning. She earned 35 cents a load, about what we made picking cotton and not only had we lost that load, a second load had come in and stacked up on her.

I remember vividly saying, "Don't cry Mom, I'll help you." A young, single mom when there was often little or nothing to eat had it pretty rough. Mom developed blood poisoning after a needle broke off in her thumb. Her arm got three times its size before Dr. Miller got to it. For weeks she couldn't work. We nearly starved; my little stomach was only a ridge. My legs were so thin that red and white blotches covered them. Later I came down with tuberculosis that I never knew I had until test revealed it when I was an adult. I knew I had been awfully sick. I carry the scar tissue on my lungs today. Classmates recall that I always had a snotty nose.

Being raised in that little shack on Young Switch Road wasn't all bad, it had its rewards. The Pan-Am Oil Co. switched there and the conductor always had company comic books that he gave me. I loved reading even then. I spent many hours with the hobos who traveled the rails. They weren't bums, just in transit looking for work. They told many stories about home, their travels and the families they left behind. I loved their stories and still look forward to a good story today. Those hobos probably had a lot to do with me spending most of a lifetime storytelling. I loved the sound of that old steam engine. I would climb to the top of the derrick and watch the train coming for miles. Smoke from its stack reaching high in the air. No amount of money could convince me to climb that derrick today.

I've told the following hundreds of times before but it's because I've searched, since I was a boy, for the rest of the words. It was a song sung by a young hobo, playing a guitar, which was rare in Cajun country, where mostly just accordions, fiddles, scrub boards and washtubs were played. Anyway, the guy I call Hobo Bill sang this song but I recall only the chorus. It went like this, "Well, I wondered home one day where I used to run and play, only to find I was too late. Old Rover was gone from his pallet on the lawn, the old folks had died or gone away."

Well, the old folks are all gone; the Young Switch station is no more, the dirt road is blacktopped and called Paul Hardy Road. I have only the memories of that wonderful Mom, Young Switch Road and that little shack that built me. 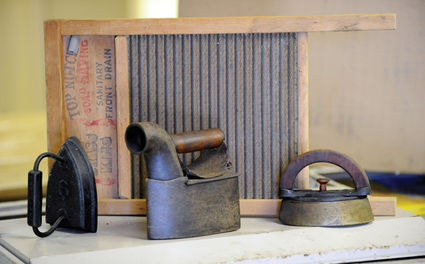 Sunday is Mother's Day. Mom will be gone sixteen years, come Sept. 2. It's hard to believe it's been that long. Maybe it's because, in my mind and the memories of home, she still lives within me everyday. Mothers must be God's chosen people. If you have one, count your blessings. If your Mom is gone, think about her and give thanks for all she did for you. Thinking of you Mom. Happy Mother's Day to each and every Mom, May God bless you.

(Personal Note.) I'll always be thankful to Harry and Margie Stephens, who drove to that little Cajun town to be with me and attend Mom's funeral service. Also, to the members of the Wednesday Lunch Bunch, who were kind enough to send a beautiful fruit basket to let me know they were thinking of me and my family.