Sherlock Breaux in the Creaux's Nest 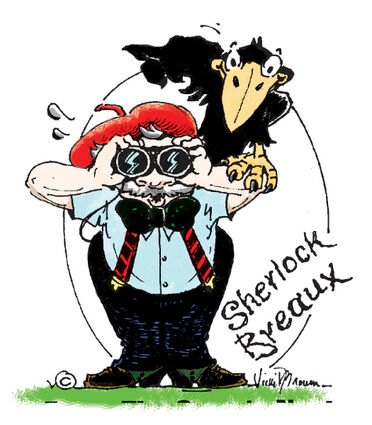 JEWEL OF THE GULF COAST TURNS 51

Bridge City incorporated 51-years ago, on July 7, 1970. I think it’s important to examine what brought a mostly knitted community to come together and a few years later become a city. The community, up until 1965, was clannish and some of the old timers were KKK sympathizers. My young bride and I arrived in 1955. It was some time before we were accepted. Everything changed after 1965, the year that ushered in the Worster era. Bridge City played a football game for the state championship and in 1966 brought Orange County its first football state championship. That’s when old timers and new comers united for one cause. In the march to the state championship the former Prairie View community was forever changed. The school district, in conjunction with the new city, started to grow and change. The youngsters, who played for Coach Chief Wilson, are now in their 70’s. They became an inspiration to the boys that followed, most in their 60’s now. When the city incorporated there were two factions, those for and those against. The close split elected P.M. “Red” Wood, first mayor, with just a three vote margin. Bridge City has been blessed with mostly good city leadership over the years. Good city managers, with maybe a couple of exceptions. No one could ask for better leadership than what the citizens experience today, with an outstanding city manager in Jerry Jones. In these many years, some young professionals moved in and made a difference in the growth and betterment of the city. I’ll only mention a few but there have been many more. A young banker, the late Fred Gregory, brought change to the banking industry and made it possible for business start-ups and growth. Dr. David Olson and Dr. Mark Messer arrived, along with insurance man and civic leader, Bill Nickum, and they have been pillars of the community. The biggest boom since WWII is coming to Orange County and will last eight to ten years. Bridge City will burst at the seams. Housing is already in short supply The Chevron project will bring economic growth to all our municipalities. We have a strong county government that is prepared to meet the challenge that will bring some stressful situations, not only to the county, but to our city. That’s a good problem to have. Happy Birthday Bridge City, put on your big boy pants, it’s a big boom coming. Along with President Biden’s infrastructure the city won’t ever again see a poor day. I may not be here to see it but remember who predicted it.

Even though filing for the 2022 elections doesn’t began until November, three Republicans, former GOP senator Don Huffines, former Texas GOP chairman Allen West and Gov. Greg Abbott have announced they are running for Texas governor. The Republican Party is planning to move the primary to a later date, more time to redraw redistricting lines. Texas is adding two congressional seats, so gerrymandering is important to the GOP. Huffines was the first to mention building the border wall in hopes of getting Trump’s support. Abbott jumped on the wall issue and picked up Trump’s support when he visited the border with Abbott. Trump only completed 69 miles of the 2100 mile border, only 17 miles of new wall in Texas makes a lot of open space between Brownsville and El Paso. The border wall is a political tool that is playing nationwide more so than in Texas, where citizens believe tax dollars could be better spent elsewhere, like fixing the damn grid. The wall is being used as publicity about a wall Abbott is not going to build like Donald Trump’s 2050-mile wall that Mexico was going to pay for. U.S. Rep. Fileman Vela, D from Brownsville, blasted Abbott for continuing to make the border sound like a war zone, which it is not, instead of prioritizing Texas and making sure we grow our economy and get people back to work. Gov. Abbott is creating a distracting media circus with a twice impeached, former president whose organization is facing 15 indictments and maybe some himself. Valley farm owners claim it would be the biggest land grad in Texas history if Abbott goes through with it. The media has reported that Abbott hopes to pick up Trump’s support for president in 2024. It will never happen. Trump will throw everyone under the bus, including Ted Cruz, for Florida governor Ron DeSantis. From this day on, Florida will be Trump’s base, like Manhattan was. He will want his president to be one of his Florida boys. Trump is done. He will never again run for office, but he will keep working the cash cow as long as he can. He faces a lot of legal expenses not far down the road. U.S. Rep. Vicente Gonzales, D McAllen, blasted the Trump visit. He said his constituents were offended Abbott would bring a former president, who incited violence on Jan. 6. Let the race begin.

TURNING BACK THE HAND OF TIME

The “Miss Heather” pulled out of her homeport with Capt. J. Montagne at the wheel. She was hitting on just half her cylinders. At the Roundbunch crossing bridge, first mate D. Burgess called out to the bridge tender, “Open her up mate.” That’s when the “Miss Heather” went limp. Chief engineer, B. Cormier, had taken his boots off for smooth sailing but he had no answer for the ship getting crossways in the channel. A mile from port the long planned voyage came to an end. The “Miss Heather” had to be towed home. The seagoing crew on board, “The Boss” Cormier, “Buckshot” and Barbara, David and Laurie Ess, Kenneth and Connie Smith, Bobbie Burgess, Devera Cormier and Darlene Montagne. It’s remarkable they didn’t even have time for the first can of soda pop with the foam on top before the long sea trip came to an end. (Editor’s note: I believe the “Miss Heather” has been idle in port ever since.)

Bridge City police agent David Hamlett is stabbed but was able to arrest the assailant after being wounded. Chief Wilson Roberts praised Hamlett, “This kind of crap has got to come to an end,” the Chief said. Officer Hamlett is in the hospital. *****On July 17, the Houston Texans will be playing the Chicago Fire, of the World Football League, in the Astrodome. Coach Jim Crossland, former head coach at Little Cypress-Mauriceville, is defensive coordinator for Chicago. The game will be televised. *****Jim Dunaway, a native of Cleburne, Texas, is a candidate for Orange City Council. He is in the law firm of Hustmyre, Harris, Dorman and Dunaway. (Editor’s note: Jim went on to become mayor of Orange. As far as I know, he is the only living member of that firm unless Murry Harris is still living.)

Happy Birthday to 100-year-old WWII and Korean veteran Ed Hyatt. A good guy and a great American hero.*****Special thanks to Tommy Simar, Sue and Bud for the fresh picked figs. Figs may not be plentiful this year so I really appreciate the gift from our friends.*****Josette and Van Choate, are now known as Mimsy and Vandad, after daughter Caylin and husband Dustin Verrett welcomed Walker James Varrett into the world. Walker, 21 inches high, weighed in at 8 lbs. 11 ozs. He was born on June 20.*****A few folks we know celebrating birthdays. July 7: A special lady, longtime friend, mom of three, pretty Donna Peterson celebrates this day. Also celebrating is Necey Mumbach, Alyson Smith and David Peck.*****July 8: Happy Birthday to Elizabeth Dupuis, Margie Bean and Lynda Barulich.*****July 9: Celebrating today is Teri Chaffin, Mike King, Laverne Joseph, Patrick Halliburton.*****July 10: A great friend over the years Donna Riley celebrates today. I’ve been wishing her happy birthday for at least 45 years. Also celebrating is Joni Abshire and Kori Brown who turns 23.*****July 11: Happy Birthday to nurse practitioner Lana Griffith, Cleon Hogan, Kathy Lynd, Michael Brinson, Charlotte Stout and longtime friend Dayle Gunn Weatherford.*****July 12: Our buddy, pretty county treasurer Christy Khroury and country commissioner Sue Bearden, Dera Breaux, and Josette Webb all celebrate today.*****July 13: Celebrating today is coach Billy Bryant, Julie Kahla, Steve Sarver and Kristen McCurry. Happy Birthday to all.*****Sixty-seven years ago this week, July 5, 1954, Elvis Presley’s first recording session took place at Sun Records in Memphis. The song he recorded was ‘That’s All Right.’ That’s hard to believe. I met him for the first time two years later in Gladewater, Texas at Joe Hammond’s Roundup Club. That was on a Friday night. He played at the Louisiana Hayride in Shreveport on Saturday.*****Car wrecks in this area, mostly by young people, and gun violence around the nation, are on the rise. Way too many people are dying from both. I fear gun violence has become a way of life and will be seen as normal if some gun control laws are not taken seriously. The NRA says leave it like it is. Over the July 4th holiday 627 were killed.*****The Wednesday Lunch Bunch held its second gathering last week since returning to weekly gatherings. The lunch at Robert’s drew a nice crowd of quality folks. V.J. brought her husband, Wilson Roberts, best known for being Bridge City’s first police chief. As a 50 years lawman he did much more. He was an investigator for the district attorney, South East Texas task force, deputy sheriff at several locations and state fire marshal all over the state, stationed at Wink, the home of Roy Orbison. He also assisted Texas Rangers in one of our area’s largest drug bust. Judge Chad Jenkins brought a special lady, his wife Wendee, Judge Joy Dubose Simonton brought her pretty daughter Adley, Judge John Gothia, Commissioners Johnny Trahan and Kirk Roccaforte, along with Tax Assessor-Collector Karen Fisher and Constable Pct. 2, Jeremiah Gunner was good representatives for the county. Bridge City Mayor David Rutledge and Alice Cole Hartsfield represented the Cow Bayou folks. Judge Derry Dunn came in from Mauriceville. Now that the Lions Club Carnival is done, we hope to see our Lions Club friends return to our weekly gatherings. Robert’s 12 noon, weekly, everyone is welcome. Y’all come.

CAJUN STORY OF THE WEEK

Clotile and Clovis Begnaud drove in from dere home at Cow Island and went to Shucks Restaurant, in Abbeville. Dey planned to got demselves a good store-bought meal while dey in da city, dem.

Clovis him, ordered one of dem big seafood platters. Clotile her, didn’t order jus yet but while Clovis was eating him, she fanned him wit her church fan. Wen he finish eating, dey boat went outside and came back in. She ordered a seafood platter and Clovis fan her while she eat.

Da waitress, Lula Mae was observing dem her. Den she axe dem dere secret of being so loving in spite of dere age.

Clotile answer Lula Mae, “Well Sha, we got to eat one at a time us because we don’t got but one set of false teeths.”

Major League baseball All-Star game will be played Tuesday, July 13, at 6:30 P.M. Even though no Astros were voted starters by fans around the nation, Houston will be represented by Jose Altuve, with his seventh All-Star selection. This selection ties former Houston second baseman Craig Biggio for the most All-Star appearance by an Astro. Altuve is eight on the franchise all time RBI list with 603. Also making All-Stars are Carless Correa, Michael Brantley and Ryan Pressly. Correa said about Altuve, “He’s the face of this franchise and he’s gonna keep being that for a long time. He’s a special player we all look up to.” Not bad for the shortest starter in the majors. The Astros lead the West Division with 52 wins, 33 loses; three and a half games ahead of Oakland.*****That’s all for today. Read us cover to cover and check us out on the web, therecordlive.com. Take care and God bless.