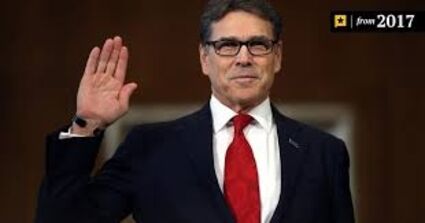 Rick Perry (Richard Perry) was the 47th governor of Texas, serving from 2000-2015. Perry served as the longest presiding governor of Texas after being elevated from lieutenant governor to governor upon George Bush's election as president. He is a graduate of Texas A&M. Interestingly enough, while at A&M he ran for student body president and lost to John Sharp. Perry later defeated John Sharp in the race for lieutenant governor. He went on to unsuccessfully run for president of the United States and was later appointed Secretary of Energy. John Sharp, after his defeat for lieutenant governor later became the chancellor for Texas A&M, a position for which he still serves.

Perry began his political career running for state representative as a Democrat from Haskell County where he was raised by a cotton farmer out in far west Texas. He later switched parties and became a Republican and successfully sought the office of land commissioner. Perry ascending to the position of land

commissioner was somewhat odd due to the fact that while a state representative he advocated abolishing the position of land commissioner, having been offended by the fact the incumbent land commissioner had required farmers to reveal the kind of poison they were spraying over fields in which workers were working.

Perry began the long Republican domination of statewide offices primarily using huge political campaign funds. It was not much of a secret that in order to be appointed to an important statewide position by Perry, it was necessary to pony up at least $100,000 for the Perry campaign fund. He also was noted for luring new businesses to Texas by giving state grants. A comparison of the grants and campaign contributions were extremely similar; many of the businesses receiving grants from the state fund also contributed heavily to the Perry campaign. Perry's successes in creating memorable improvements in Texas government is almost non-existent. His greatest successes were strictly political having nominated appointments to boards, commissions and boards of regents in his lengthy occupation of the governor's office.